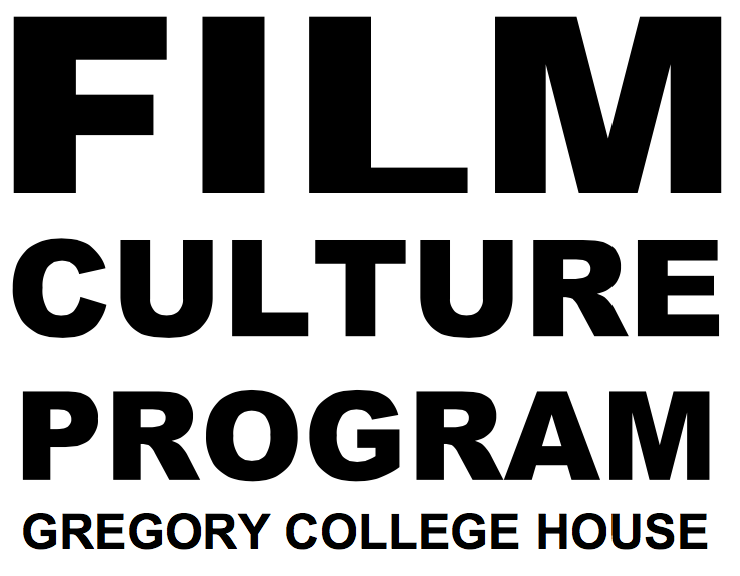 Gregory College House Film Culture Program (FCP) provides a uniquely enriching residential experience for undergraduates with a passion for film and filmmaking. The program expands the scope of film study in the classroom with plentiful screenings and discussions, in all cases encouraging participants not only to think about what they are viewing, but also to consider the history, craft, context, and ideological import of cinema. To this end, the Film Culture Program at Gregory is proud to offer an academic credit option through the university’s Department of Cinema and Media Studies. Established in 2008, the Film Culture Program credit is the latest chapter in Gregory’s rich history of academic programming—one that began 40 years ago with the house’s Modern Languages Program, the first thematic community at Penn to offer course credit for residential scholarly work.

For Fall 2022, the Film Culture Program continues with a multi-faceted approach to allow our students the opportunity to view and discuss films throughout the semester. Participants will have a significant degree of freedom to chart their own course progress through a range of classic and modern works. Our expectation is thoughtful, well-reasoned, and enthusiastic engagement from all enrolled students via screening, discussions, and maybe even some written work at the end.

​Screening Series The program will offer four weekly screening series throughout the semester. Our themes this term are:
• Adrift in the City | Mondays
• Farewell, Adolescence | Tuesdays
• Women Filmmakers | Wednesdays
• The Eyes of a Child | Thursdays

Watching Films
All regular screenings will be held in our cinema lounge located on the 1st floor of Van Pelt Manor building.
• In-person attendance at film screenings and discussions is required of FCP participants earning course credit.
• You should also be almost exclusively watching for-credit films during screenings.
• Obviously, do not make distracting noise during screenings. For example: silence your cell phone, avoid snacking on foods with noisy packaging, no excessive or loud talking during screenings, etc.

Discussing Films
All discussions of films will be moderated by Film Culture staff. You should watch the films at full intellectual engagement and be prepared to discuss what you find most interesting, intriguing, perplexing or moving.  Passively viewing a discussion is not participation.  Knowledge of cinematic terminology is not expected or required. When attending screenings and discussions, please make sure your sign your full name in the attendance roster.

You need to attend a minimum of thirteen films from our screening series over the course of the semester and fully participate in discussions that follow.  Your grade will be docked one increment (i.e., A to an A-) for every film missed.  You may watch any films from all of the four series. There will be a scene analysis assignment (either written or oral) due at the conclusion of the semester.  Submission of a thoughtful analysis along with full participation will result in an A for the course. Students will also have the option to view a few current releases for their credit count.

Most of our communications will be via the Film Culture listserv, which will include both enrolled students and other interested participants.  In the first weeks of the class, we will communicate via the wider Gregory College House listserv.