The History of Gregory

In many ways Penn’s college house system started in Gregory House, though Gregory didn’t exist yet.  Beginning in the 1970’s, two adjacent but very separate entities, Van Pelt College House and Modern Languages College House, posed challenging and successful alternatives to the standard ideas of dormitory life.  Their innovations in residential programming, faculty involvement, and community-building became fundamental to the campus-wide college house system born in 1998.  At that time, the two houses joined to form Gregory, named after Emily Lovira Gregory, the first woman to serve on the instructional staff at Penn (1888).

Van Pelt Manor and Class of 1925 (which still houses the Modern Languages Program), are both small, four-story structures, featuring private bedroom space for all inhabitants.  That privacy is fundamental to the life of the House, but is balanced by Gregory’s unparalleled tradition of plentiful, well-attended and vibrant events, many of which have a long history.  Wednesday night study breaks, Sunday brunches, Bring Your Own Mug, Dinner with Gregory, and multiple foreign language coffee hours are regular fixtures, week in and week out, and annual events like the International Dinner, Lucid Dinner, Oscar Party and New Student Orientation barbecue/karaoke bash are always highlights of the year.  Cinema is central to Gregory, and there are often as many as ten film screenings in a given week. 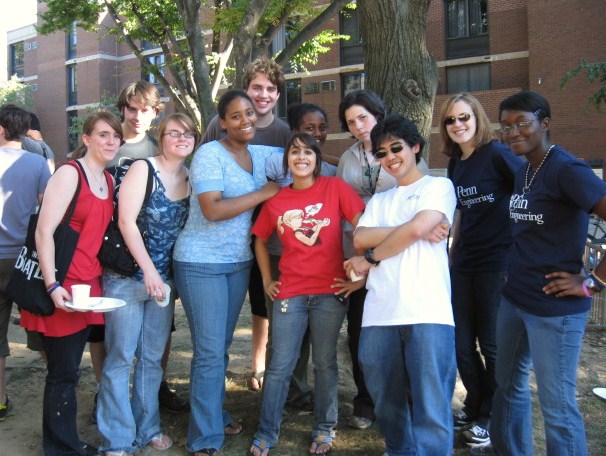 The snug confines and relatively small size of the community—244 undergraduates, nine graduate students, plus a highly accessible senior staff of administrators and Penn faculty—make for a close-knit, nurturing community.  Thus almost all of Gregory’s upperclassmen are returners—previous Gregory freshmen, now returning to the House for their second, third or fourth year.  The House is in many respects student-run, with those returners serving as House Managers, Resident Advisors or in other ways playing an active role in our programming and philosophy.

Gregory’s freshmen have many opportunities to hit the ground running at the House and at Penn.  There are generally between 80-125 first year students between both buildings.  The third and fourth floors in Van Pelt are almost entirely freshmen; each also has a Graduate Associate, Residential Advisor and Senior Staff member, dedicated to helping freshmen make the transition to college life.  First year students in the Modern Languages Program live on the upper floors of the Class of 1925; C’25 houses six Graduate Associates and a House Fellow along with its 81 undergraduate residents, so it is almost impossible not to engage with house staff on a regular basis. Gregory's transfer students are also well-situated in the House, primarily clustered together with other transfers on the second floors and strongly encouraged to work with House staff to arrange transfer-specific socials and other events. 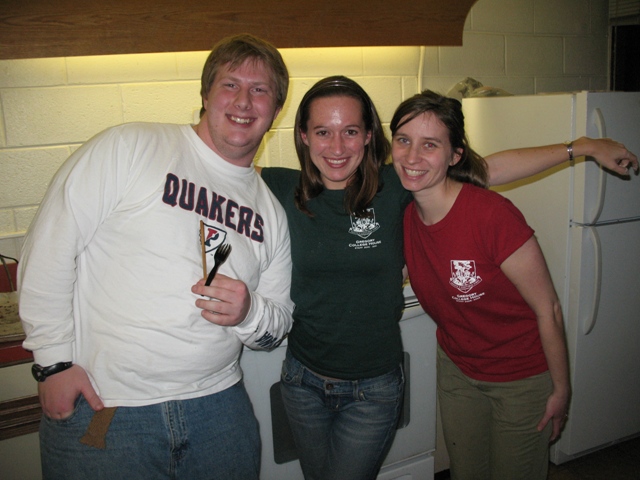 Gregory’s pioneering residential programs fuse community-building and academics. The Modern Languages Program dates back decades and is one of the most unique living-learning environments at Penn.  Through language dinners, coffee hours, film screenings and other events, participants gain, improve or maintain fluency in Chinese, French, German or Spanish.  The Film Culture Program, founded in 2003, caters to movie lovers of all sorts with numerous eclectic screenings per week, trips to Philadelphia theatres, in-House seminars, and more.  The annual College Houses Student Film Festival began in Gregory and is still co-presented by FCP.  Residents participating in our programs can choose to enroll for course credit in Cinema Studies, French, German, or Spanish... more credit-bearing residential options than any college house at Penn.

In keeping with the House's longstanding tradition of faculty presence, Gregory hosts two regular faculty dinner series, Dinner with Gregory, in which guests are invited by our residents, and Diversity Discourse Across the Disciplines, spearheaded by Faculty Director Lisa Lewis.

In summer 2014, Gregory underwent substantial building renovation that transformed our environment; the most dramatic shift was on the first floor of Van Pelt, where a new programmatic west wing became a bustling hub for study, play and culture.  In summer 2020, Gregory is scheduled for additional enhancement, including air-conditioning in student rooms and new windows throughout both buildings. 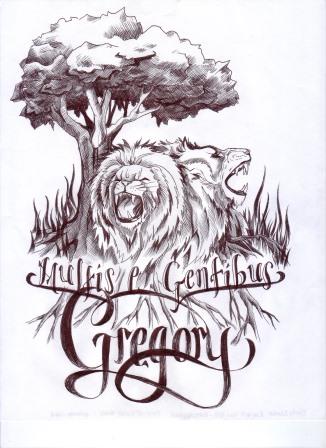 Danie Greenwell and Minesh Patel designed the coat of arms (left), which depicts a pair of lions rampant on the Earth's surface rooted together by a mighty tree. The lions not only salute the house of McGregor-- for many years, Van Pelt College House housed the majority of the University's Scottish exchange students -- but also symbolize Gregory's unique dual heritage as two pioneer residential houses at Penn. If the lions look to the past, the tree represents Gregory's common purpose and fruitfulness as a cohesive community. The globe symbolizes Gregory's international character, embodied in the Modern Languages and Film Culture programs; likewise the motto "Multis e Gentibus Vires," which means "From many peoples, strength," celebrates Gregory's commitment to cross-cultural unity. To celebrate Gregory's renovations during summer 2014, we unveiled a more realistic take on the coat of arms (right), reinvisioned by Emily Zanker.

Born in Portage, New York, Emily Lovira Gregory (1841-1897) taught school until, at the age of thirty-five, she entered Cornell University (B.A. 1881). After obtaining a doctorate in botany at Zurich, she took the position of teaching fellow in the department of biology at the University of Pennsylvania, thereby becoming the first woman faculty member as well as one of the earliest to give instruction at any but a women's college. She was appointed lecturer at Barnard College the second year of its existence, and she played an active part in championing the cause of graduate students and encouraging laboratory assistants by paying them out of her own funds. She died at the age of fifty-six, two years after becoming the first woman professor at Barnard College.  (Source: Penn archives).

The vision of Van Pelt College House-- the first experimental residential community at Penn and ultimately the prototype for all the College Houses-- was clearly articulated in a proposal from History and Sociology of Science Professor Mark Adams to President Meyerson in 1971: "Our basic purpose is simple: we want to counter some of the intellectual and emotional confusion and loss of direction in the undergraduate community-- confusion inevitable in a large modern university such as ours.  We hope to return to one of the guiding principles of the American collegiate system: daily contact outside the classroom of students and teachers.  We feel the life of the mind is, indeed, something to be lived by students and faculty together. We hope to encourage this kind of living by establishing an informal and congenial situation which will help to smooth away some of the difficulties which size has brought us.... Our aim is not an isolated living unit but an open "University college" -- a house which can take advantage of the resources of this large University and yet provide some of the intimacy of our original College of Philadelphia of the late 18th century."  This vision remains Gregory's mission to this day.